Your Name in Lights

Ever Want to be Famous?

You and I and everyone else who ever was or ever will be will eventually become the same thing: a memory. The longevity of our memory is something that most of us thinks about at least once or twice a day – “Will I be remembered as a ‘good person’? Will what I’m doing right now matter in 100 years?” Who wants to be forgotten? 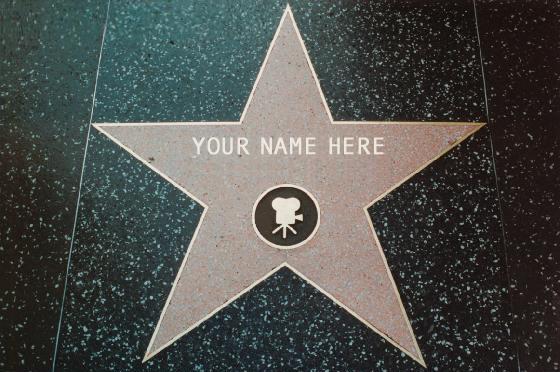 Killing the obsession with earthly fame comes for some through stoking the fires of personal gain rather than achievement – they’re not concerned with who remembers them as long as they got what they wanted while they were here. Others don’t have to kill the beast, because their desire is like John the Baptists’, to minimize their own name while maximizing the name of Christ.

Whether you desire to kill the fame monster or you’re hopelessly beholden to it, there’s a tension that showed up in your gut when you read “Will what I’m doing right now matter in 100 years?” If you felt that, you get it. You get that we all have a desire for significance.
There’s a universal tension between who we are and who we will become that grows more vivid the closer we get to death. Just ask anyone that’s been in a car wreck or overdosed or had some other near death experience. The thought of losing control over how we’re perceived by others is a cliff far more terrifying than the fiscal cliff in the news these days. We don’t just long to be remembered, we long to be remembered on our terms.

True Fame in Your Future

In the book of Revelation (not Revelations, please), Jesus tells the church at Philadelphia they’re on track to earn a crown – a highly coveted chunk of eternal reward – but, if they don’t persevere in doing what is right, they’ll forfeit it.
He also tells them of an even more coveted reward – “I will make [him who overcomes] a pillar in the temple of my God. Never again will he leave it. I will write on him the name of my God and the name of the city of my God, the new Jerusalem, which is coming down out of heaven from my God; and I will also write on him my new name. (Rev. 3.12)”
A pillar is strong, a support that holds up something (in this case, the Heavenly temple of God), and important pillars often have plaques with inscriptions on them. Jesus tells them God will autograph the person, put the name of the new Jerusalem on them, and write a new, personal nickname on him or her. Biggest fame, ever… and on God’s terms! Trust me, way better than anything you or I could come up with.

Surrender is about trusting that God’s way is infinitely more valuable than our ways. To walk in freedom is to relinquish control over how we will be remembered. I’ve often said the Bible is a collection of 66 books by over 40 authors that ultimately ask the same question from God to us: “Will… you… trust… Me.”
Well, will you?