Get Free, Stay Free
SPOILER ALERT: If you haven’t seen Shawshank, I’m about to tell you things that will “spoil” some of the surprises in the plot.

Okay, let’s talk “The Shawshank Redemption”. Smart script, brilliant plot, bad theology (e.g., “it’s okay to steal money from a thief and take the law into your own hands”?), coarse language. You don’t need to see it. 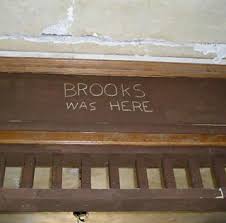 Main character, – “Andy Dufresne” (Tim Robbins), convicted on circumstantial evidence of a murder he didn’t commit. Sent to Shawshank prison where he falls in with a bunch of “not so bad” guys including “Red” (Morgan Freeman) and an old timer named “Brooks” (James Whitmore), who’s been in prison for about 50 years. Every one of these men, much like you and I “didn’t do it”, right? “Innocent men.” At least, that’s their story. What’s yours?

Brooks isn’t the main thrust of the movie, but he provides insight into a problem you and I face on a daily basis, and a problem that’s been weighing on a guy I’m discipling right now, whom I’ll call “Hank”. Brooks spends 50 years entrenched in prison culture before he’s paroled as an old man. Hank’s a lot like Brooks. He’s been imprisoned by his past – shameful things he’s said and done – and now in Christ his term is over and he’s out on parole so to speak. (Note: theologically, Hank’s in a different situation because he’s really been pardoned, not paroled, but in the eyes of the law, he’s a free man. Tracking?)

Brooks realizes in a sharp hurry that 50 years of being told when to eat, when to go to the bathroom, when to sleep, etc. that making his own decisions and “walking in freedom” is utterly foreign to him. He becomes overwhelmed by “life on the outside” because he’s so used to “life on the inside”. In desperation, Brooks carves a note on the rafter in the room he’s rented and hangs himself.

When his final letter reaches the old inmate buddies back at Shawshank, Red explains to Andy the concept known as “institutional syndrome”:

“individuals in institutions may be deprived (unintentionally) of independence and of responsibility, to the point that once they return to “outside life” they are often unable to manage many of its demands” – Wikipedia, “Institutional Syndrome”

or, as Red explains the effects of being behind prison walls to Andy:

“These walls are funny. First you hate them, then you get used to them. After long enough, you get so you depend on them. That’s “institutionalized.””

Are You “Hanking It”?
I’m sitting down with Hank last month and he seems stuck in neutral. He’s bitter and puzzled about it. “You sound like you feel… ‘stuck’. What’s got you stuck?” He lands on some things he can’t forgive someone for and the things he can’t ask forgiveness for. He’s got a bad habit – pride. Huh? Let me explain. I asked him what causes him to not ask forgiveness and he nails it after only a three second pause. “Pride.” But, pride is a habit, a prison wall we build ourselves…

“Hank, do you realize she’s [the person who offended him repeatedly] has been forgiven by Jesus what that means?” He squints and thinks… “Essentially, you’re looking at her and saying ‘Jesus forgives you, but I have a little bit higher standard for you than He does…”

So, what does this have to do with you and I?

Leave the Walls Behind
Ephesians tells us to put off the old self… and put on the new self… Scripture tells us we are “new creations”. But, Brooks didn’t feel free even when he stepped out of the prison walls. He was so used to the old flesh, the old habits, the old walls that he reverted back to prison mentality even when set free. Hank is so used to forgiveness being about his standards, that now as a believer in Christ’s substitutionary atonement, he’s having a hard time walking in freedom without imprisoning others with him… Ouch.

Red called it. Are you depending on the prison walls from your old self? Are you putting your confidence in the flesh? A friend wrote on his Facebook wall last week something to this effect: “Christianity is freedom. But prison is often so hard to leave…” Andy Dufresne knew what he’d do with his freedom – he had hope in something greater. He hadn’t put so much faith in the prison, fear, and shame that he’d forgotten what freedom could look like.

So, today, will you walk in freedom? Will you consider your ways and the freedom that is available from the lies of shame and guilt? Leave the walls behind. You’re free. Walk free.