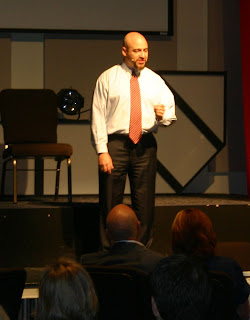 “That Day” was (and continues to be) a fantastic success. In April, Men Step Up (Gwinnett) celebrated 5 years in ministry. They thought the best way to celebrate it would be to invite every guy who’d ever walked through the door at the Gwinnett location to come back any Friday in March. On top of it all, they decided the best way to cap off a series about “the value of being present” was to have a dinner theater production of “That Day”, where the main character gets to see the value of the presence (or lack thereof) of a godly man in the lives of those around him.

So, they hired us to perform this one man show (“two man” if you count Rolin Williamson, who played [awesome] guitar and sang [awesomely], or “14 man” if you include all the characters I play… But, you get the point) at Crosspointe Church, in Duluth, GA. The house was sold out at about 150 people – men, women, and children, who came hungry for truth, food, and entertainment. Thanks to California Dreaming and the Lord sustaining me through this 90 minute “monologue (?)”, none left disappointed.

California Dreaming had appetizers ready for the sold out crowd as they piled into the performance room watching video clips of Men Step Up testimonials/interviews. Rolin Williamson offered up a sweet version of U2’s “Still Haven’t Found What I’m Looking For” to set the tone for the show. Then, after a few moments of awkward silence, Dan Matthewson (Aarron Pina) busied his way to the stage with an abrupt opening line that defined the character from the outset: “Can we just get to the point, please?! I hate wasting time…”

Aarron delivered over a dozen characters in a moving first act, making for a very suspenseful intermission. During intermission, attendees were treated not only to a fantastic, catered dinner, but a family style rendition of “table talk” Men Step Up style. Audience members who had just witnessed a man “unprepared for his own judgment” got a chance to wrestle with scripture and their own thoughts on what their judgment will really look like. Rob Marbury, an audience member, said the show took him “beyond salvation”. Bullseye.

The second act proved equally moving and poignant. After great performances by both Aarron and Rolin Williamson, Casey Sanders led the crowd in a brief “popcorn” forum where participants got to share their reflections on the show, the performance, and the truth of God’s word. Gears were definitely turned, hearts were moved, and paradigms stretched. Another bullseye!

In fact, Aarron received a standing ovation and by the time everyone who wanted to talk or ask him questions was done, it was almost an hour before he could get out the door! Wow – God really “showed up”. In the coming months, a local singles ministry hopes to have us perform for them, and a private party is planning to have us in Dallas, TX for a command performance. Additionally, two business men who attended April’s performance will be talking with Seasons of Life later next week about how to put the show in front of several groups of local Christian business owners forums later this year.

Once again, nothing like we had planned. But, as God ordained, a thousand times better. Look for more updates on Twitter, Facebook, or our web page at www.thatday.info.