Speak Life – What Can a Little Sunlight Do? 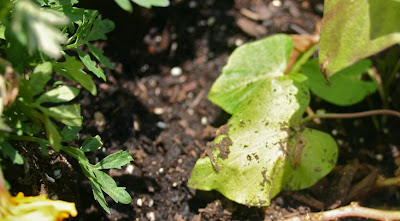 Covered Up
This morning, our young daughter, Presleigh, went outside with Mommy to water some flowers in our yard and tend the garden growing in several 18 gallon plastic bins we’ve planted. When I followed up on their work, I noticed there were a few leaves on a sweet potato plant that were turning yellow. Not cool. However, with just a single lifted finger, I was able to move the soil off the leaf and expose it to the sun again. Tomorrow, I expect to see that leaf thriving and in a few more weeks, producing.

After several phone calls and a bit of prayer, I finally got to meet “Alex”. He called us yesterday after searching the internet for ministries in this part of town. Frankly, I was skeptical even getting the call, as we’ve never had someone just “look us up” on the web like that. After his wife, had suffered a hernia, she
missed a lot of work and found themselves in a very hard place. About a week ago, they found help from St. Vincent’s. He and his family of 3 had been put up at a local extended stay hotel for the week while they tried to get back on their feet. He seemed a little frantic when he called, explained his story, and asked if we could help.

I did a little asking. He did some more explaining. They had been covered by the soil of circumstance and turning a bit yellow, like my sweet potato leaves. But, there was still life in them. They still had hope – in the Lord, in the work they were already doing, and in the belief that with a few fingers lifted on their behalf, they would again see the same vibrant life my flimsy sweet potato plant is destined to produce.

Their Story:
They’re both employed right now, her here in Cumming and him about 20 miles away at a fast food restaurant. With a 6 year old son, they alternate work while the other is watching him. But, because of her physical limitations and his time taking care of her while she was injured, their checks for this past week were about $60 each after taxes. Alex had already begun looking for work that would lower their gas consumption. For now, he’s remained faithful to his employer while battling the uncertainty of “how” God would bridge the gap between now and next paycheck.

Thank you, to those who are helping.

We talked about faith, God’s ability to provide, and His amazing track record in “Alex’s” family up to now. With one eye looking up, he remembers God is faithful. But, with the other eye on the clock he knows that tomorrow morning at 11AM if he hasn’t paid for another week or even another day, they’ve got to move out of the hotel and into their minivan. Today’s interview went well – good chance he’ll get hired within the next few days. But, that doesn’t bring a paycheck in for another few weeks.

Speak Life:
Speak Life is the part of this ministry that provides food for families like this in situations just like this one. It’s also the initiative designed to help people to recover financially, emotionally, and relationally from challenging seasons of life by bringing enough “sunlight” to their situation to help them thrive on their own again. As of this morning, Seasons of Life has about $140 in matching funds committed to raising funds to help Alex’s family get back on their feet. This means: for every dollar given to Speak Life this month up to $140, a matching dollar will go to help this family – give $10, they get $20. Give $140, they’ve got $280 – enough to buy them another week and almost enough time until their next paycheck(s) – this time, full week’s work of paychecks.

The cool part about this family is that when they discovered how deep the hole was that they were standing in, they looked up. They also “looked up” ministries and churches – members of the body of Christ that were designed to help people get up and over. They realize they can make phone calls, get interviews, fill out applications, and all the rest. But, ultimately, the outcomes and help is from the Lord.

Would you consider helping this family out on a deadline? Yes, gas cards are still a great gift to help them out. Food is taken care of. But, if you would consider them in your financial support – they would greatly appreciate it. If you or someone you know would be willing to take in a family of 3 for a few weeks or even a month, we can tell it will make a world of difference. In the meantime, we’re only $140 away from buying them the breathing room [or sunlight] of another week in their extended stay, but this is a pretty time sensitive situation. Help us keep them indoors.

To participate in this project, go to http://bit.ly/solmsupport and designate your gift “Speak Life” or “Where Needed”.