Seeing the Results
I love immediate feedback, don’t you? Do something, see the results. Measure the results, adjust for next time. Isn’t it great?
But, how do you feel when you can’t see the immediate payoff of your efforts? Me, too.

“That Day” is a one man show based on Tim Stevenson’s “The Bema: a Story About the Judgment Seat of Christ”, in which I get to play “Dan Matthewson” (also a pretty results oriented guy, btw), and over a dozen different characters who tell the story of a Dan’s story. It’s a wild, amazing jaw dropper as he gets to see the payoff of his efforts: eternal rewards at the judgment seat of Christ according to 2 Cor. 5:10.

Our latest presentation of this 2 hour look behind the curtains of heaven was live at Woodstock First Baptist Church’s “Warehouse”. Seating was set for about 80 people, but we wound up with an audience of over 100! It was received with rave reviews – there was laughter (more than we expected – hooray!), tears, and as we expected, a little elbowing between people as they witnessed the truths of the bible played out in a highly entertaining, thought provoking, and challenging parable.

Delayed Gratification, but On Target Feedback
Ironically, we’re still waiting from some feedback from our cameraman who filmed the show, but we did get some still photos, which you see here in this post. As the video becomes available, we’ll post anything of high enough quality on our YouTube channel, to pass on a bit of the event’s flavor. However, our online feedback forms gave us a clear picture of the theological impact of the story:

Bam! Bullseye on that last one. That’s what we were hoping to hear. Glory to God.

Husband and wife team Ryan and Crystal Casey got together with ex-boy band member Kevin Swan to add great musical punctuation to the performance. We’re thrilled with how the night went and are grateful to Echo Ministries for inviting us to put the production on.

Special thanks, also, to Jacob Burton for his invaluable assistance as Aarron’s production assistant throughout the rehearsal process, and to Jeff Johnson and Sunny Williams for giving us use of rehearsal space at Brown’s Bridge Community Church and North Point Community Church.

For information on how to bring a production of “That Day” to a church, retreat, or organization near you, sent email to aarron@seasonsoflifeministries.org or visit us at www.thatday.info!

The Number 1 Lie About Doing "MORE" for God

Painful Lies
On October 26th, we staged our fourth local performance of a one man show called “That Day”, about a man who receives his rewards at the judgment seat of Christ as promised in 2 Cor. 5.10. As I listened to feedback from those who witnessed the performance and read through comment cards, I was struck by the number of times I heard people say “I realized tonight that I could be doing more for God.“

It was painful lie to hear.

They weren’t lying – they sincerely want to do more for God. It was only painful to hear because most people have been brainwashed into thinking one of their greatest problems is that they’re not doing enough (at least in American culture).
The lie is: “You’re not doing enough.” The truth is, God is not the God of “enough”. God’s will for us is that we do His will for us. It’s not about doing all of the tasks on our list – it’s about doing only the things that God has ordained for us to do. The truth is often that we’re doing too much – that we’ve heaped extra things on our plate out of guilt or fear (guilty, and guilty as charged), things that are good, but not the things assigned to us in a particular season.

What Do You Call an Underachiever?
Most people would refer to that person as “lazy”. And, they’re probably right. But, someone who consistently does less than what is required is in violation of God’s order and commands, specifically whem it comes to the first command given in the garden – “take dominion”, but also references such as Col. 3.23. Ultimately, God calls underachieving sin.

What Do You Call an Overachiever?

The painful truth is, God doesn’t discriminate when it comes to eternal rewards – “I desire obedience, not sacrifice”. When someone does more than what’s called for, it’s often labeled “overachiever” or “zealous”. But, can we be honest? All time is spent doing something. If we’re spending it doing something God hasn’t called us to do, we’re using time He set aside for us to do something else He ordained for us to do. What does God call an overachiever? Same thing he calls all who do iniquity: wicked, sinner.


In Their Defense
I understood what the commenters were saying – most of the people at “That Day” had a massive epiphany while watching the show: that God is watching us, recording our every deed, word, and private thought. Even better than that, He’s not doing so to shame us, punish us, or squash us for being lowly worms. He’s promised us rewards. So, their desire to do more of the things God was calling them to do naturally increased. Good for them and glory to God.

Ultimately, God desires us to walk in obedience, “by the Spirit”, in His ways, not to the left nor to the right, obeying all of His commands and statues, because they bring life. He wants us to “do the right thing”… all the time. This is abiding. This is total surrender, total obedience. Not sprinting on a never ending treadmill.

But, in a Genesis 3 world, we’re assured both that we’ll never do this perfectly and we’re not given license to stray from the path for “good reason”. There is no “good reason” for disobedience. It’s still disobedience. The litmus test for all of our actions is: “is this what God is calling me to do right now.” The pivotal matter is not that we do more, rather that we do more of the right things – not merely good things, but the things God has specifically ordained for us to do at this time.

May God teach us to use our time to do all He designed us to do, nothing more and othing less.

Will You Pray for Aarron and "That Day"? 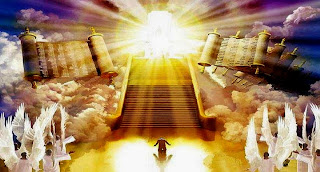 Go ahead, say it… “Judgment Day”. How does that pairing of words make you feel in your gut? The way that day is talked about in our culture, even in Christian culture, it doesn’t sound very exciting. Sounds terrifying. Ever notice that?

But, 2 Corinthians, Chapter 5 tells us that day is when we get to cash in our eternal IRA and see what Jesus has saved for us in our heavenly investment portfolio. How cool is THAT?!

So, in three weeks, I’ve been asked to perform this wild story, “That Day”, based on the Tim Stevenson book “The Bema: a Story about the Judgment Seat of Christ” at a big church over in Woodstock. Just drive down 92 – you can’t miss it. It’s a one man show where I play a guy named Dan Matthewson and about 11 other people in his life – from his boss, to his cleaner, to the Lord Jesus Christ – and what happens when he comes before the judgment seat of Christ.

Rather than our usual Monday Morning post for encouragement, I’m encouraging you to dig into scriptures like 2 Cor. 5:10 and 1 Cor 3:10-16 and meditate on this:

If heavenly rewards are what is at stake – how will what you do today impact what you receive in eternal rewards? Now, how should it cause you to live?

These are questions most of us can’t answer with great accuracy. But, on Saturday night, October 26th at 7PM you’ll have a chance to watch what it could be like for at least one guy who’s a lot like most guys you know.


In the meantime, take a look at this 90 second video and pray like crazy for me over the next three weeks that God will guard me and guide me in my very rigorous rehearsal schedule leading up to “That Day”.

I hope you will be there – it’s a free show, so we’ve made it a little easier for you. But, my prayers – our prayers – are that you would get a look at this story and it would change the way you live every single day until That Day.

For more information on “That Day” and a behind the scenes look, go to www.thatday.info.