Pretty strong words. Can you back them up?
As you read this, you’re either thinking – “Okay, Holy Roller, come down off your high horse and quit being so judgmental.” or “Amen!” Alright, there’s a secret society of you that are also responding “Yeah, that’s right… [followed by] I hope he’s not talking about me because if people knew what I do when no one’s around…” If you’re in that third category I pray that this post prompts you to action, because you are afraid. You are a coward.
Some Love for my Fellow Cowards
Today, I’m typing this as a guy who – by the grace of God alone – celebrates 10 years of sobriety from pornography this fall. “Sobriety”, because I was hooked. “Sobriety”, because all of my best efforts to turn away from consuming my Consumer failed. “Sobriety” because I nearly crashed my car a few times because I was daydreaming about when I would get my next “fix”.
Only when I acknowledged my own depravity and separateness from God, embraced my Savior and received the gift of the Holy Spirit could I set down The Ring of Great Power that had become so prrrrrecious to me, yet weighed me down, drained my resources, and delivered nothing but a momentary high followed by a “continual lust for more (Eph. 4.19)”. This was clearly a supernatural occurrence.
His-story No More Mys-stery
To illustrate my point on cowardice, allow me to refer to the guy who helped me wrap my head around my own cowardice. Casey Sanders has been a discipler of men for nearly 15 years now. He’s been married for over 25 years to the same woman. But, he hasn’t always been faithful to her. Years ago, he obeyed scripture and went public with his “habit” after confessing to his wife that he’d spent a decade watching porn in hotel rooms while away on business trips. Scripture teaches “have nothing to do with the fruitless deeds of darkness, but rather expose them (Eph. 5.11).”
“Coming out” about porn was cathartic obedience and evidence of true repentance, but only the beginning of the journey. As he told his story to the guys from Men Step Up Gwinett:

“As I traveled and made watching raunchy movies and self gratification my habit, I believed that what I was doing was not as bad as other guys who were actually sleeping with women outside of marriage. At times, I even thought my actions were a safeguard from doing something physical with someone else.”

When he finally made this confession to his wife, it led to a much longer interrogation, where out of repentance, he answered with full honesty for the first time.

“She kept asking and I kept answering. At one point she said, ‘I wish you had gone ahead and had a physical affair. What you did was Coward’s Adultery!’ ” Moral of the story: the measure of a man’s bravery is the price he’s willing to pay for the things his heart is set on.

Count the Cost, Measure the Man
As he told me the story, I could argue with him no more than he argued with her that night. If I were really brave, I’d have pursued a real, live woman that would consent to sex at the cost of romance and perhaps even commitment. If I were brave and godly, I’d have pursued a real, godly woman that would consent to sex only at the cost of a lifetime covenant of marriage as God details it and commands it in His word. Instead, I jumped over far lower hurdles that demanded little bravery, boldness, and self-sacrifice than obedience would require [and reward].
Over the years, I’ve been greatly encouraged by God Himself [via the Holy Spirit], truth from His word, and the testimonies of repentant and bold men who have shared the trials God has brought them through on the battlefield of lust. This Friday morning (6:30AM sharp), my friend Michael Leahy will very briefly share his story [at ONE TH1NG, at the Cabernet Steakhouse on Windward and GA-400] with about 100 men with the bravest of hearts who are willing to think out loud about the truth and lies surrounding “The War Within”.

I’ve also posted regarding my interview with Michael here on our blog today. I also encourage you, as you explore this issue to watch Andy Stanley’s second message in the “New Rules for Love, Sex, and Dating” series, linked in that article. Bottom line, we all give our lives to something. It’s time we start doing the difficult stuff instead of settling for the easy fixes. God rewards obedience. Sometimes in the earthly realm, but more importantly in eternity. Consider what price you’re willing to pay as you “take up [your] cross and follow [Him]”.

This post is not appropriate for children
At What Cost?

Michael Leahy’s story is easily Googleable (look, I invented a new form of the verb “Google”). Look it up or watch some of these clips on Vimeo. I won’t go far into his story for purposes of brevity. The short version is this: because of his addiction to pornography decades ago, he lost his job as a very successful software sales exec, his marriage, the respect (and relationship with, for a time) of his kids. Today, he stands as a man restored by God, often on a stage in front of hundreds, if not thousands, of college students, many of which come out to see veteran porn actor Ron Jeremy debate with him. 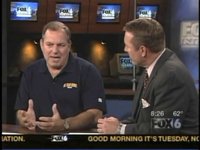 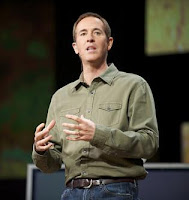 For years, prior to my acceptance of Christ as Lord and Savior I heard the term “dehumanizing” and denied it tooth and nail. You may have just completely tuned out when I said that term, too. If you did, I respect your choice, but I have a question for you that Michael shared with me in our interview:

“[When you watch pornography] you are not holding a woman in awe for anything more than her sexuality. When’s the last time you did that for something other than her sexuality, Mother Theresa?” – Michael Leahy

When the answer is “no” it’s bold evidence of dehumanization – reducing a person to something far less than their humanity. Does porn encourage you to consider the needs of the performer(s)? Does it spur you on to “love them as Christ loved the church and laid himself down for her to make her holy”? Are we tracking?
If you’re living with porn as your secret or you think it’s okay, my first question is “do you love Jesus and trust Him as your Lord and Savior” or are you counting on the popular belief that without Jesus you’ll get into heaven because you’re “good enough and God should just let you in or it’s unfair”. If you answered “a) Lord & Savior” then you’ve got a different question to wrestle with – “How are you dealing with the voice of the Holy Spirit when he tells you to leave the porn alone?” Second question: “what men are walking close enough to you to help you when you ignore the voice of the Spirit of God that is in you?” Call Michael. Call me. Call my wife.
Get discipled in the truth. Yesterday.
If you’re not a “Lord and Savior” guy, watch Andy’s series (especially part 2) for an understanding of what God has to say about women, their worth, and how He views them and then read the book of John, the book of Romans, confess Christ as your Lord, receive the Holy Spirit, and live by His power. Without His power I, too, would still have hooks deep in my life from pornography. Praise God for freedom in Christ.
Discipleship Implications:
I have met with no less than two dozen men who have gotten honest with me about the impact of pornography in their lives. It. Is. Devastating. Sneaky, but devastating. Andy Stanley hits it on the head in one of his messages and I hope this truth sinks in like an anchor in your discipleship of the people around you:

Michael Leahy and Bravehearts Ministries works closely with one of the largest evangelistic college ministries in the country and shared with me some of the most difficult reality slapping I’d heard in a long time. I asked him “how did porn impact your ability to function in your spiritual gifts?”     Leahy: “One of the most noticed things about people who struggle with that sin is forgiving themselves. You beat yourself up because you sinned against you. For me, it had a huge impact and barrier to my relationship w/ God. The average rational human being knows when they’re doing right & wrong, and the strength of my recovery is in direct proportion to my intimacy to God. I’m susceptible to sexual temptation when I’m out of fellowship w Him. That’s what sexual sin does. I literally remember praying to God with a gun in my mouth – ‘teach me how to pray again’.
[More poignantly,] porn keeps totally qualified leaders on the sidelines [in college ministry]. The dirty little secret of college ministry is that 80-90% of guys who apply for staff or go on mission trips are disqualified because of this issue. If you were an HR mgr and you had to disqualify 80-90% of your workforce that you want to promote, how big a problem would that be? The top 10 ministries (groups of hundreds of students) have evaporated in a year because these guys witnesses has been so badly damaged by porn. Is it a ministry of Christ followers or a Christian club of “friends with benefits”? [It can make us] impotent in our power for God.
So, think about it. Talk about it. Pray about it. And, listen/obey the Spirit of God. Then decide “what (more importantly who) do you want to give your life to?” Anyone can find something worth living for. Are you willing to find something worth dying for? Would that someone be willing to die for you?

Jesus did. Your thoughts?