Monday Morning Momentum (in a Minute)

Three Reasons for a Link Instead of a Post:

A few weeks ago, many of you saw our oldest daughter’s photo on Facebook – she had run away from home one morning and we were in a desperate search on her behalf. It was the longest 7 hours of our life – deputies, detectives, K-9s, etc. Yet, it was filled with prayer, community, and comfort as only God could deliver it.

She had a lot of explaining to do when she returned and the core issues that drove her to running would not be fully exposed that day or even in the days to come. Brianna, like most of us, was struggling with her identity and sense of self worth. 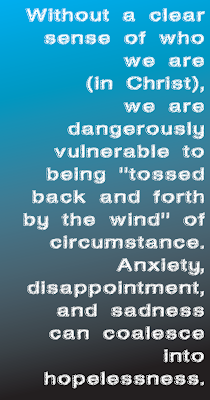 Do You Remember the Time?
Many of you reading this can recall a time in your teenage or even college years when life just seemed confusing, disappointing, and unbearable. Without a clear sense of who we are (in Christ), we are dangerously vulnerable to being “tossed back and forth by the wind” of circumstance. Anxiety, disappointment, and sadness can coalesce into hopelessness.

That’s precisely where Brie had found herself. By the grace of God, she has overcome many obstacles and is currently staying at a residential “behavioral health facility” that helps kids regain their balance in the midst of a chaotic time. It’s not faith based, so we have to bring our own notes to the table when we visit her each week. As parents, we are deeply prayerful on her behalf as well as thoroughly engaged in the “stabilization process”.

I recently reminded Brie how Mommy & I live a very public life and asked her how public she wanted us to be about her journey. She smirked and said “you can tell them everything, as long as it helps”. Wow. Big, brave girl! Below, you’ll find a few action items for yourself and links to articles that may help you if you are/have experienced what she’s gone through or are ministering to someone who’s been through anxiety, depression, cutting, etc.

In truth, it seems much wiser to wait until Brie is on steadier footing before we go any deeper. It’s her story to tell. But, for the sake of all who are asking, we will let a few generalities out – see below. Thank you, all for honoring her in your prayers and for allowing her the space to tell her story at the appropriate time. In short, she does want other teenage girls to know that depression is real, running away has immediate consequences, and self harm can have long term consequences. The way out is “through”.

To Parents of Teens:
In the past two months, this series of events has brought me to the table with no less than a dozen parents who are either going through similar circumstances (two of them the same week as Brianna) and we’ve learned a thing or seven. I’m assuming before this list you consider the fact that helping your teen gain grounding in who they are in Christ is paramount in your plan. Otherwise, they’re relegated to what the rest of the world does – finding their identity in clothes, cliques, and popular culture – a much smaller package than God designed for them to walk in.

Last, don’t minimize their pain, doubt, fear, or struggles. Their world is very real to them, though perceived only in part and obscured by raging hormones and the loss of some of their brain cells (see PBS’s Frontline article). The prefrontal cortex of the brain handles

It’s the part of the brain that prevents us from making irrational, teenage decisions… yet, it’s not fully developed until we reach 25 years old! Throughout her recent exposure to the behavioral health system, we’ve constantly reassured our daughter that she’s not crazy – she’s merely reacting normally to a crazy situation, with a developing brain. By God’s grace, she’ll be convinced of that.

What Can You Do?
As far as us? We’re good. We don’t need sympathy right now. No, really – since this began, God has honored our prayers and shown us that while this is not His perfect will, He is sovereign over us and will use this time of testing to shape and galvanize Brie’s character, testimony, and ministry (not to mention ours).
Put your sympathy card away and get your kneepads on – to pray for Brianna as she “digs in” to do the hard work of introspection, emotional excavation, and claiming her identity in Christ for the first time. We are so proud of her and incredibly blessed to see her faith thriving in the midst of all that has gone on. Clearly, the Lord is ushering her through the valley. She will emerge victoriously and with greater assurance of both His love for her and her identity as His child.

For Brie?
Pray for her to continue to engage with her counselor, her Lord, and her work. God is molding her character in the best ways possible right now and we (and she) are thrilled with her growth. Long term, she wants to enroll in a deeper, faith based program that will help her grow in a deeper understanding of her identity in Christ.

As far as you? Take care of your kid. Or, someone else’s if you don’t have any. Invest all you can into their first decade and be fully present, safe, and available for them during that time. Teach them the value of prayer and leave the rest up to God. Volunteer for your church’s children’s ministries or even for middle school or high school. But, most of all – pray. Love God, thank Jesus for grace, and dig in to the Word.

Huge thanks to the many who have rallied around us, especially the many sitters required to care for the three youngest while we’ve made countless trips to hospitals and “Doctor Camps” for visits and group sessions with Brie. Also, great thanks to Dr. Bob Montes, who has helped us stay grounded in a fully biblical approach to this situation. Thank you, for all of your cards, prayers, and fellowship. Continue to pray that Brie grows more sensitive to the voice of God within her and that He continues to reveal His great nature to her as healer, comforter, redeemer, and lover of her soul.

AP & CP
—
Update: 5.24.2013
Yesterday’s family session was incredibly tense, but I walk away from it “oddly optimistic”. Brianna displayed oppositional behavior and let a lot of anger out over the course of several rants throughout the conversation. However, this may well be an important step forward since it was the first session she was off any and all prescription meds. As a friend of mine put it – it was “just Brie” with no crutches, forced to walk through the discussion on her own for the first time. To use this analogy, she “fell down” a few times in the discussion, but at least kept walking to a point. It was not an easy conversation for either Cristine nor I, but I am encouraged to know that this was a maiden voyage, with many more to come.

Thank you, all for your prayers for her:
God is up to something. 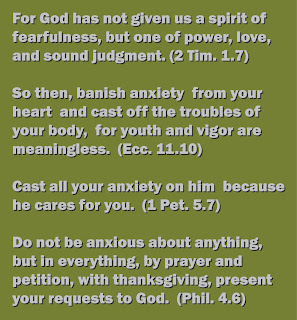