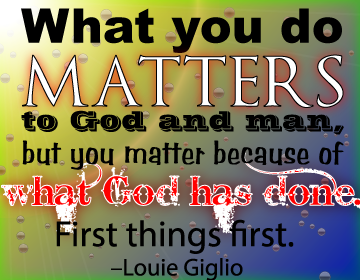 How to Make the Gospel Seeker Friendly

Watch Your Own Film Lately?
There are some great communicators out there in the world. Last month, I had opportunity to communicate truth through a 90 minute one man show. While I don’t think it put me in a class among those men, it did renew my appreciation for such men.

The amount of time poured into the craft of communication cannot be understated, if one is to do it with excellence. Today, I’m watching video of my performance with a critical eye and a yellow pad of paper. World class communicators make it a habit to “watch the film” like elite athletes who seek to achieve peak performance.

Two Extremes and an Extremely Dangerous Center
There is great value in learning from mistakes and honing one’s craft. But, there is a tension in our culture between sharpening one’s communication skills on one end, foolishly “winging it” on the other end, and yet an even more dangerous spot in the middle where we become worshipers of our gift of communication instead of relying on the Giver of all gifts (often referred to as “the liability of ability”). This happens when we cross the line of developing our skills and believing our own press…

But, there is a reason why Paul makes it a point to explain that he didn’t use flowery language, etc., isn’t there? There is a reason why so many were astonished at Peter and John, though they weren’t “educated men” (Acts 3 & Acts 4), isn’t there? Was it because they dumbed down the gospel? Was it because they had graduated from the Tony Robbins school of Communication on the Cutting Edge of Relevant Leadership?

Who Does the Attracting?
In His letter to Titus, Paul gets to the bullet points of preaching and teaching and makes it clear how to make the gospel as appealing as possible. Paul never advocates for being intentionally foolish and simply blurting out nonsense. But, Jesus hints that it’s not our words that draw people to God, rather the God of the word who does so. (See John 6:43) Further, here are a few points Paul also does not make:

The gospel is about grace, not performance. But, the overflow of a life surrendered to Gospel is… wait for it… godliness… God initiated, God directed, God glorifying and God pleasing performance. (Not to be confused with man made behavior modification or putting on airs of “fake it till you make it”.)

The common thread here is this: don’t rely on your slick communication, some grandiose new, “relevant” presentation of the truth, or softening, denial, or watering down of the truth to make the teaching of the gospel more appealing to the lost.  Instead, abide in Christ and God’s agape love so tightly that the natural overflow of your life is godliness – this is the outward manifestation of a changed, exchanged life which God Himself uses to attract others to the Savior. Performance is the result of grace, not the other way around. And, it is this performance that God uses to attract the lost and dying.

Meditate today on these:

“Teach slaves to be subject to their masters in everything, to try to please them, not to talk back to them, and not to steal from them, but to show that they can be fully trusted, so that in every way they will make the teaching about God our Savior attractive. (Titus 2:9-10)”

“For since in the wisdom of God the world through its wisdom did not come to know God, God was well-pleased through the foolishness of the message preached to save those who believe. For indeed Jews ask for signs and Greeks search for wisdom; but we preach Christ crucified, to Jews a stumbling block and to Gentiles foolishness, but to those who are the called, both Jews and Greeks, Christ the power of God and the wisdom of God. Because the foolishness of God is wiser than men, and the weakness of God is stronger than men. (1 Cor. 1:21-25)”