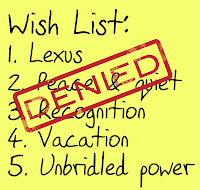 Does This Qualify as a Testimonial? 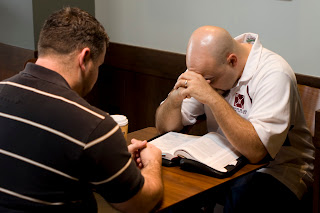 Every week, I sit eyeball to eyeball with guys and talk about what God is showing them in the word, where He’s moving them in their walk, and how they’re struggling or how I can pray for them (or both). Hopefully, the influence of one man and one God in his life makes an impact to the world around him.


Recently, a guy told me that he called his wife to let her know he was praying for her. She unknowingly gave me the coolest complement in her response when she asked him, “Are you meeting with Aarron right now or something?”.
“No, I’m just at work.”
Honored. Humbled. Invigorated and encouraged.

Question for Men:
What man (or, men) are so intentionally in your face and your life that their influence is clearly marked for the positive in your marriage, your conversation, and your witness in the marketplace?

“Highly productive, well rested, God focused, and ready for anything.“
Describe you? Last year, God began stirring in me a desire to break from a number of bad habits… or perhaps a lifestyle. Through a few secular books, he opened my eyes to productivity principles that had been “hiding in plain view” right there in the scriptures. After compiling weeks of study, hours of notes, months of application and “tweaking” and publishing several blog posts, I was invited to speak to two groups of men over the course of about 4 months: Men Step Up – Gwinnett, and ONE TH1NG in Alpharetta, GA.

The results are still to be calculated, having directly reached 90-100 men from 15 different churches, dozens of businesses, and an untold national impact through our blog and FB pages. Many of the men were struck between the eyes when it comes to the concepts of clutter, workflow management, organization, and the stewardship of ideas: “most of us have never been taught how God sees it.” Clutter and disorganization all come from one source: a divided heart. And, only a heart fully surrendered to one Master can keep from being caught up in the rat race.

“You can’t worship two gods at once. Loving one god, you’ll end up hating the other. Adoration of one feeds contempt for the other. You can’t serve both God and [stuff]. (Mt. 6:24 MSG)”

Conversations among the many men pinned this down: our schedules are the most clutter friendly arenas in life and regardless of the type of clutter we battle, the losers are most often and severely our families.
God’s word does not return void and did not for any of these men. Today, I’m still receiving occasional texts from guys to tell me that they’ve just eliminated hundreds (on guy, thousands) of emails from their inbox and have begun to experience what David Allen calls the freedom of “Captain and Commander” mode. This information may soon be available in eBook format and as a half day workshop for men in the marketplace. Inbox me or keep your eyes on our pages for details and updates.

5 Ways to Help the Hopeless

Do you know someone who’s always hopeless or pessimistic? They’ve tried and failed. They tried again with a better plan or better people and the people, the plan, or both fell through. “Maybe, it’s just me.” they think. They look at the sky and see a half a cloud, so it must be about to pour, right? You plead with them – “It’s (insert your city or town). If you don’t like the weather, just wait a few minutes and it’ll change.”

You beg and reason with them until you’re blue in the face. You may even begin to question yourself in light of all the evidence they present. Maybe, you’ve even walked away from them for a season.

“You have a negative view of the past, of the present, and of the future. You feel that nothing is going to get better—that it’s terrible now and it’s going to stay this way the rest of your life,” says Dr. Archibald Hart.

David asks God the tough questions throughout the Psalms about why the wicked prosper and prods at God “how long will you let… [this injustice continue]” Jeremiah models it, too, in 20.18:

“Why did I ever come out of the womb to see trouble and sorrow and to end my days in shame?”

The great news for your friend who is hopeless, burdened by shame, and weighed down by pessimism: Elijah, Moses, Job, Jonah, Jeremiah – great men of God all despaired for their lives. Yet, all saw miracles of God before their own eyes (or once they were out of the belly of the fish and could see something… Ah, you get the point.)

In a Genesis 3 world, we will all have trouble. But, Christ assures us in light of this He has overcome the world and will deliver us from our light and momentary troubles. Ultimately, we will one day meet Him at the Bema seat (2 Cor. 5.10) and be rewarded for the things we did in His power and crowns for the pains we suffered in the meantime.

Great rewards await… all who overcome.